After 27 years, Ethiopia has now a new king. Yes it has a new king but not a normal king as it should be. The new king is a ghost royal family member but never confessed his genealogy. Now, he proved his lineage and is officially crowned to be the king of the defeated normal Crown Family. 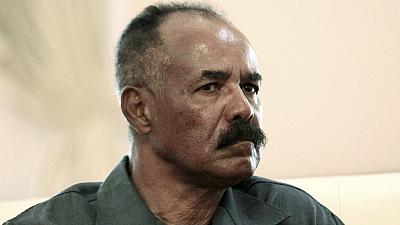 Since 1974 the Crown Council of Ethiopia did not succeed to have a king of the Kingdom of the Ethiopia though its exiled Crown Council has never lost hope to re-establish its defeated empire.

The exiled Crown Council of Ethiopia has re-located itself in the USA after Derg killed its last King. Since then it is continuing to run its defeated Royal Family with its smuggled Ethiopian capital resources under the leadership of His highness Prince Ermias Haile-Selasie.

The Royal family had not lost hope. They re-arranged their Order in 1996 and initiated many charities that were meant to continue King Haile-Selassie’s legacy and imperial reign ove Ethiopia and Ethiopianism.

But now, they seem to be betrayed by a ghost Royal family member who pretented to be against the Kingdom but now proved to be from the Royal Family – Dictator Issaias Afewerqi.

Issaias Afewerqi visited the resting place of his Grandfather whish is found in Gonder Ethiopia. By doing this, he assured his Royal Family Lineage. And, he claimed his highness as a King Dictator is official.

Now, the defeated Royal Family of Ethiopia has to dissolve its Crown Council found in USA and be loyal family to the successor of their defeatd kindgom. By doing so, Ethiopia will continue to exist as the Empire of the Dictators of the Horn of Africa.