Jelal Yassin Abera and the nature of his advocacy works

To be honest, I had no idea who Jelal Yassin Abera was until a friend of mine sent me a document composed of 174 paged compiled data (please click here to find the document). And during my five years in politics, I missed an opportunity to know about him. I think he is not an outspoken activist.

In his 174 pages, the detailed compilation is all about “who is who” in the current ruling regime of Eritrea. This huge data is no simple. It could only be collected by a better informed and well-educated person. It is divided into categories and analyzed. However, the technic used and observing the way the data was analyzed, it raises a critical question.

The nature of data compilation can be summarized as follows:

The data was compiled by “dividing Eritreans” Eritreans into two groups: (1) “Tigrigna” and “& others. This kind of classification has never been used in Eritrea. Since 1970, Eritreans are divided into 9 ethnic groups and any document about Eritrean demography lists 9 of them. Jelal Yassin used his own grouping system. But, this is done to divide the people into religious groups to serve his purpose. Tigrigna represents Christians while Others is meant to represent majority Muslims. The Tigrigna speaking Muslim(Jeberti) are grouped into “Others”. In the figure below(taken from the dossier), the color is meant to represent geographical zones(Zoba) inhabited by majority Tigrigna (blue) and Others(Red).

Under the existing social groupings, Eritreans are divided into nine(9) ethnic groupings. This clustering was introduced during the struggle for independence by following the Communist model of Nation and Nationalities. The ethnic-based division was introduced to replace the previous tribal groupings. It was primarily implemented based on spoken language and shared cultures. With the exception of one ethnic group(Rashaida), eight of the ethnic groups have the same name as the language spoken.

Jeberti refused to be grouped with the newly created Tigrigna ethnic by claiming their unique identity. Although they did not deny their mother language to is Tigrigna(there is some argument with the spoken language too), they claimed that their family lineage, history, culture, tradition, mode of life and religion is different from the other Tigrigna ethnic group.

After independence, the right to have a separate Jeberti Ethnic claim gained its momentum after EPLF rejected it without any hearings. The transitional government issues National ID cards that recognize only 9 ethnic groups and every official data released is prepared based on 9 ethnic groups. As a result, there is no official data, in whatever form published apart from the 9 groups.

What Jelal Yassin Aberra did is contrary to the classical statistical data representation system. He compiled the socio-demographic data by dividing Eritrean people into 10 ethnic groups. This is nothing but to serve the basic purpose he fights for. The figure he presented is a fabricated one. However, it says everything about his ambitions. In his table, he gave Jeberti 8% out of the total population size of Eritrea. This is something weird data. Although it is hard to figure why he put that number, it is not hard to reject his fabricated number.

Compared to the already recognized ethnic groups, the Jeberti community in Eritrea is not significant. They live predominantly in Asmara and Mendefera. Jeberti Eritreans are known people in Eritrea for their unique way of life and activities. For the last 100 years, their number is growing through assimilation. These assimilation is creating confusion to differentiate who is Jeberti. Today, there are other Eritreans who are now called Jeberti simply because of their spoken language and religion(Muslims). For example, many Asawurta descendants who live in the highland of Eritrea are considered as Jeberti by mistake. But the people themselves never recognized themselves as Jeberti but by their own family. Jelal Yassin could have added these people, including their settlements, to magnify the Jeberti population in Eritrea.

For example, according to current groupings, I belong to Bilen. Bilen speaking people are distributed in almost an entire region. They have villages predominantly Bilen speaking people. Yet, according to the socio-demographic distribution, Bilen have never been more than 3% share. In contrast, Jelal Yassin assigned 8% for Jeberti(see the table below which extracted from the dossier). This type of presentation is misleading. If it is used for political purposes, it can be as dangerous as it is fabricated- fabrication of information.

For more details, please follow the link attached here below:

3. Using the Data as a Political Tool – the incidence of Forto 2013

It is a mistake to make conclusions about the possible purpose of this data compilation but there was some important hypothesis that can be developed from the nature of the data, failed military coup d’etat of January 2013 and the political actors who played as mobilizing agents outside Eritrea.

on January 21, 2013, there was an incident in Eritrea which tried to remove PFDJ regime by force. This incident was a failed military coup in Eritrea after more than 100 soldiers led by a Military Colonel who to took his mechanized battalion all the way to Asmara and occupied temporarily the Ministry of Information building found in the heart of Asmara, Forto. Though dictator Isaias dismissed the incident by belittling the operation three weeks after, a serious hypothesis can be developed by correlating important events related to political movements outside Eritrea.

Many news outlets outside Eritrea reported about the event the time the operation happened. Eritreans came to learn about the incidence through news broadcasted from abroad followed by family telephone calls.

Example: New York Times, Paris based independent News Media(Erena), and an Independent Journalist Martin Plaut are among the first reporters of the incidence.

Of course, my objective is not to bring all the events related to the coup d’etat. Rather, I am trying to correlate the data compiled by Jelal Yassin Abera and its possible link with the operation.

Depending on the year of service and nature of data collected, it seems the information details about Eritrean institutions and personnel that were who were in power from 2001 to 2012, mainly after the crackdown of PFDJ Central Political Committee and arrest of G – 15. It has listed all the administrative constituents and structures of the regime including a detailed name list of six(6) administrative regions, 59 sub-zones, and 2606 villages or local administrations. A name list of almost every public, government, military, security, and the diplomatic officers is well presented.

Such detailed data might have been planned to be used as an instrument in outlining strategies to throw the regime and then replace officers of the ousted government with new officers. The document has compiled name list of more than 5000 government officers. 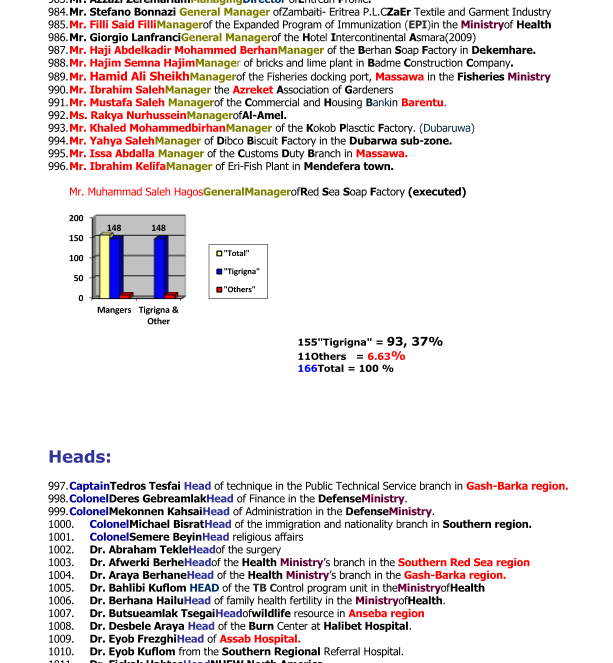 But there is one worrisome nature of the data. What Jelal Yassin Aberra did was, he divided the officers along religious affiliations. This is a serious political maneuvering. In many occasions, PFDJ regime is accused of as a “Christian regime”. And, if any coup d’etat is assumed within this premise, then the outcome can lead to another kind of oppression or civil arrest.

When it comes to sectarian politics, Eritreans have a bitter experience. Any attempt to that tries to look Eritrean politics along religious lines can trigger civil war as it was experienced between EPLF and ELF during the thirty (30) years struggle for independence.

It is hard to say Jelal Yassin Aberra was part of the Master-mind of the failed military Coup D’Etat. However, analyzing his family background, the case of Jeberti Rights advocacy works and the accusation of PFDJ as a Christian regime, it is time to re-think what type of political advocacy is carried by Eritreans. Any mistake made today cannot be easy to correct it. And, Eritrea can face another political crisis.

View all posts by Tesfabirhan