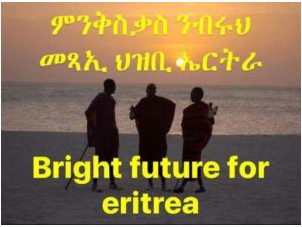 This is an open reflection and dialogue on a political movement called “Bright Future Eritrea”. This movement was established in Switzerland as a civic organization under Article 60 of the Swiss Civil Code under a name “Eritrean unit for a change in Valais – TEUs”.   It is currently operating all over the world by opening through its members in different countries.

As a means of organizing its members, it has produced a manifesto called “ማንፌስቶ፡ ምንቅስቃስ ንብሩህ መጻኢ ኤርትራውያን!” The manifesto is produced only in Tigrigna language so far. This manifesto claims that EPLF (Eritrean People’s Liberation Front) is the only and only political organization that has messed Eritrea and Eritreans since 1970 untill now.

This movement is widely known for its famous brand labeling “EPLF is a Bandit” ህግሓኤ ሽፍታ እዩ። Though EPLF has changed its name to PFDJ in 1994, Bright Future claims that EPLF = PFDJ and to use PFDJ is meanignless. I do not understand why they prefer to use a name of an organization that does not exist. However, they claim that EPLF and PFDJ are ideologically the same and if we use EPLF as a name it includes every evil work committed since 1970 by this same existing organization but different but ideologically the same regime in Asmara.

Bright Future has a advocacy against EPLF/PFDJ is extremely effecctive. I do have lots of respect for the fearless campaign. There are three areas where I differ with them. These are

For more, I did much deeper conversation with one member of the movement and can be found by clicking this link.

As a continuation of my reflections on this movement, I did a live facebook public dialogue on 11/02/2018. In this presentation, I claimed that Bright Future Eritrea is living in the past and to use EPLF is misleading and nonesense. And I called to update their manifesto.

This four hour discussion has covered a specific portion of their claim. I hope it will give a general view of the movement.