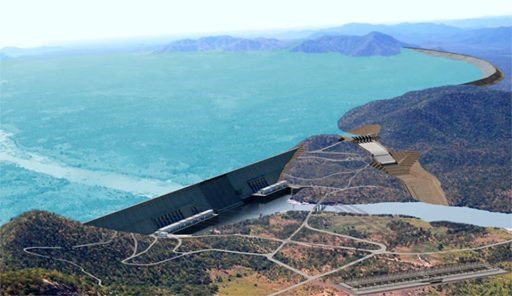 Awate Staff of www.awate.com has translated and published an interview conducted in Arabic by AlMasri Al Youm with PFDJ(Eritrea) ambassador in Cairo, Fasil Gebreselassie Tekhla.

The interview revealed how far Eritrea is involved between the two countries. It is literally beating drums of war. After categorically describing the Ethiopian Renaissance dam project a “politically motivated one”, he recalled a conversation that was sought to happen between Late Prime Minister Meles Zenawi and an Egyptian officer. In his own words,

In 1993, in its first official representation as an independent state, Eritrea attended in one of the African conferences in Cairo, where the then Ethiopian Prime Minister Meles Zenawi was present. At the time, the relation between the two countries was excellent. And here Zenawi presented an idea: Just like the Arabs sell oil to us, we sell water to all countries. The Eritrean president strongly rejected the proposal, and here, the late General Omar Suleiman, the former head of the General Intelligence responded to him. He said to Zenawi: “And who are you to say that?”

The same accusation was brought by Dictator Issaias Afewerki in an interview conducted with ESAT Reporters.

When the Ambassador was asked how he sees the Renaissance dam crisis, he jumped to accuse USA and some Gulf countries[though he didn’t mention, his target was Qatar] collaborative desire to make Egypt thirsty by reducing water supply to the Nile river.

In his words, as it is published by Awate staff

Q: How do you see the Renaissance Dam crisis?

Response: Eritrea has officially declared that the construction of the Renaissance Dam has no positive purpose in the interest of the Ethiopian people. The decision to build it is a political decision and not economic. We are not against any development project in any African country, but the dam is not for a developmental purpose.

Q: What is the real purpose behind this “political goal”?

Response: Ethiopia is mainly dependent on economic aid. It is the main African country that receives the most economic assistance from the United States, the European Union, and the World Bank. It is a country that has a “famine” and asks for assistance from the United Nations to feed its people. There are some countries that help it to finance the construction of the dam.

Q: Who are these countries?

Response: Any country that wants to fight Egypt will not resort to a direct military solution. This method no longer exists on the ground, so the last card in that war is to “make Egypt Thirsty.”

Q: Do you mean that Ethiopia wants to “make Egypt Thirsty”?

Response: Not only Ethiopia, but some Western and [Arab] Gulf countries stand behind Ethiopia and support the construction of the Renaissance Dam. Particularly since the area where the Renaissance dam is located is not suitable for agriculture.

This is a serious allegation that is intended to add fuel for the already growing tensions between Ethiopia and Egypt.

PFDJ has never missed an ally that can assist it to stay in power. Its allies are really serving well to the intended purpose. And these allies are insane as they have their own insane interest.

Eritrea’s main purpose is to keep Ethiopia as a hostage by creating interest group enemies that can be used as direct agents of proxy wars. I am not sure how pragmatic Ethiopia is to change its strategy, but PFDJ approach is very dynamic yet simple.

Since the termination of border war with Ethiopia, Eritrea understood that any additional war can put its sovereignity at risk. Despite the final and binding Algeriers agreement, the two countries could not come into peace terms. As a result, they found themselves in a “No War, No Peace” situation. Since then, Eritrea continued to play a proxy war that diverts Ethiopia’s energy and forces from being directed to  the North border.

Ally I: Al-Shabaab of Somalia

When Ethiopia refused to be abided by the decision of Border Commission, Eritrea’ s first decision was to make an ally with Somalian rebel forces and put Ethiopia into the game of proxy war. It was a perfect strategy that has served well for a while. Since 2006, it has started to coperate with Somalian forces who were fighting to restore peace and order in accordance to Islamic guidelines. When Ethiopia interferred in Somalian Internal Affairs under a cover of an agent of peace keeping force to back up The Transitional Federal Government and protect Somalia from  being ruled by “Islamic Courts Union”, Eritrea worked with Qatar in organizing rebel forces that fight against the Ethiopia backed federal government of Somalia.

This lead to the creation of Alliance for the Re-Liberation of Somalia. The Alliance created could not work together and the division gave birth of Al-Shabaab militant group. Sooner Al-Shabaab was accused as terrorist group by international community. And it was not secret as it has revealed its alignment with Al-Qaeda in consequent years. As a result Eritrea was accused of arming, training and financing this terrorist group. In 2009, United Nation Security Council(UNSC) imposed sanction over Eritrea. Since then, there are always some fresh allegations that is keeping the sanction in place.

From the very beginning, Qatar’s main interest was to use Eritrea as a path way to  Somalia. As a cover, Qatar started some small investments. And when a border dispute occured between Eritrea and Djibouti(2008), Qatar became the sole guarantee of peace keeping mission in a UN backed peace agreement. To avoid military clashes, Qatar sent about 450 peace keeping soldiers in the disputing border area.

During the good insane diplomatic years, Qatar was backing Eritrea for its financial needs spent in a proxy war to back rebel forces in Somalia and Ethiopian opposition forces that were stationing in Eritrean territory.

When Qatar learned Eritrea stood with Saudi Arabia lead forces, it ended its relationship with Eritrea without notice and discussion. This brought to an end of 12 years Eritrea – Qatar diplomatic relationship. Though, no country has officially declared for any type of diplomatic rupture, early developments showed that these two countries had ended their relationship.

After the Gulf crisis, Egypt seems to replace Qatar. Egypt’s main interest is Ethiopia’s Dam Construction Project. Egypt does not want this dam to be constructed at all. But the possibility of stopping from being finished as planned seems almost impossible. Instead, what Egypt is doing is that it is creating pressure so that Egypt’s water needs might not be affected.

To put pressure on Ethiopia, Eritrea is needed most. And Eritrea needs Egyptiance presence to divert Ethiopia’s intention that could potentially be directed to the North. To weaken Ethiopia internally, Eritrea needs countries which have interest in Ethiopia for the same mission. Egypt is a perfect choice. As a result, Eritrea is using Egypt as an means of proxy-war with Ethiopia.

Eritrea’s main interest is not a secret. It has nothing to do with Egyptian interest. Eritrea’s main objective is to use Egypt as a proxy war ally. For the last 26 years, Eritrea and Egypt had no any meaningful diplomatic relationships. It was not needed. And I believe it is not needed now too, especially this kind of insane relationship.

If Egypyt is committed for a sustainable peaceful agreement with Ethiopia, and indeed it needs it badly, no other means is productive than creating a strong diplomatic relationship with Ethiopia and other Nile Countries. Eritrea is just fueling any tension that can occur with Ethiopia no matter with which country it is.

Ethiopia seems not to be intimidated by Egypt to hult its more than century objective of constructing dam in the Nile river. It is for Egypt’s advantage if Egypt coperates with Ethiopia technically to avoid serious risk in the future. At the same time, I encourage Egypt to invest in such project so that it can  share its responsibility to make the project successfull for all those who benefit from it.