According to various credible sources and testimonies, the identified official is now revealed to be Yemane Gebreab. According to Italians news outlets,  Italian police has arrested one suspect and is searching other collaborators. 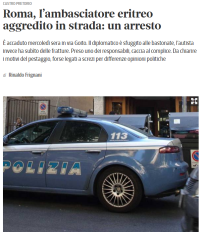 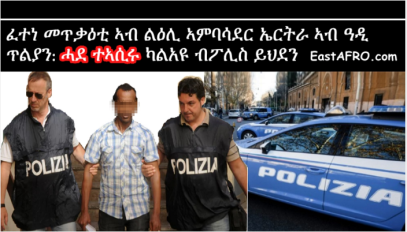 According to various sources, Eritrean presidential advisor Yamani Gabreab “was severely beaten in Italy and taken to hospital with another man who was injured”. For example, Radio Assenna has reported on its July 07, 2017 news broadcast, an Eritrean named Simon, confirmed the incident and who was the victim. According to the testimony, a friend of his(Simon) is under police arrest. The police have not yet confirmed who attacked these PFDJ officials. However, Simon told Radio Assenna they are trying to appoint a lawyer to defend the person who is under arrest.

An official Facebook account under the name of “Hagerawi Dihnet – ሃገራዊ ድሕነት” has confirmed the incidence though they didn’t mention the name of Yemane gebreab.

What is the message of this Incident?

So far, justice seekers Eritreans are shy to react violently though some occasional signals were happening here and there. Until this incident, no serious confrontation was reported against PFDJ officials. For example, there were about four in the past. As outlined below, none of these were violent but peaceful.

Some outraged Eritreans about the PFDJ regime confronted Yemane Gebreab in New York City after they found him in a public bar. As it is shown in the short youtube video, those courageous individuals chased and threatened him openly. They were openly telling people Yemane is an official from the dictatorial regime. These patriots were calling him as a killer, traitor of his comrades and a lair. In addition, they raised the issue of those imprisoned PFDJ officials and where about they are. Yemane Gebreab didn’t respond. Instead, he was frustrated by the incident and left the area in anxiety.

Those outraged Eritreans didn’t  take any violent action though they gave him the warning to stop his crimes over Eritreans.

This incident was a direct reaction in response to the failed Operation of Forto 2013. Outraged Eritreans entered the Embassy office and conveyed their direct message about the living condition of Eritrea. They asked about the Ambassador where he is about.

After a serious and heated exchange, they respectfully reminded staff members why they came in and what they wanted to convey. They posted a poster that read, “ENOUGH”.

Eritrean Embassy in London was occupied by the Eritrean Youth for Change (EYSC) members and other individuals for a brief period of time. Their message was similar as that of Rome incident. They were not violent but were outrageous by the regime in Asmara. They were claiming that the embassy belongs to them.

2016 Incident: Voicing in front of Eritrean Embassy in London, UK

This incident was an immediate reaction to the incident of shootings of innocent Eritreans in the heart of Asmara after they tried to jump from tracks loaded with forced military conscripts. This tragedy happened when members of the national service, aka national slavery, tried to escape after the tracks slowed down their speed.

Awate website recalled this tragedy as “Black Sunday”. Martin Plaut, a journalist who writes about Eritrea, reported about the name list of those who were shot on 03/04/2016.  After this incident, few but courageous women visited the office of Eritrean Embassy in London to remind what happened in Asmara. An officer from the Embassy denied the incident. 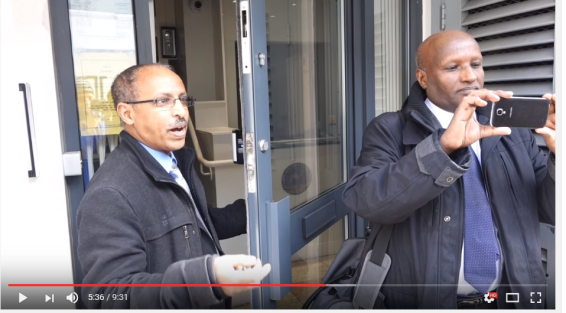 Embassy Staff members who tried to intimidate those Eritreans who visited to give an awareness about the incident. They openly denied the news and threatened those who were asking to leave otherwise they could be arrested by the police.

What happened in July 2017 is not a normal scenario. Eritreans are sending clear signals how serious consequences will be if the regime continues its crimes against Eritrean people. Today, Rome has become a nightmare to PFDJ officials. Tomorrow, all countries in the world will be unsafe to PFDJ tags.

After such gradual but fearless, outrageous appraisings and reactions, the signal is clearly to target officials in Eritrea. Every official will not be safe from now onwards unless they hear people’s plea for justice. It is time for PFDJ officials to give power to the people before a more serious action follows. Not only PFDJ officials but also their family will not have any safety.

I don’t support violence as violence brings another violence. But there is a limit for everything. Some are only resolved through violent means. Today, Rome is no more safe to PFDJ criminal officers. Tomorrow will be all other places.