Part I: Background of the Mathematical Equation

Whenever I see people reacting on every issue we raise about victims of PFDJ junta, I read or hear a parallel and ant-thesis line that tries to neutralize the case at hand. For example, PFDJ always works to rationalize the crime it commits against humanity as if it is an action taken for national security reasons. For every claim Eritreans bring, PFDJ refuses the allegation or tries to give a reasoning. For example, why soldiers are working by force  – their response is the nation is poor, unable to pay a salary. Such similar allegation neutralization tactics are in practice for the last 26 years(1991 – 2017).

What is not normal is when the same technic is in practice by justice seekers. These days, nuetralization of voices of the voiceless people is becoming so common and almost in every voice heard. For every single grievance one raises, there is always anti-thesis to downplay/under estimate it. PFDJ might have a strong reason to bring an Anthi-Thesis statement. What I don’t understand is when justice seekers try to bring another grievances that is intended to normalize the particular case at hand but not to add that grievance into the new one. Instead of adding grievances, they try to silence the voice coming from another grievance. Such anti-voice cancelation voices will only benefit those who work hard to silence voice of the voiceless people.

The first time I encountered such anti-thesis of neutralization was in 2015 when I went to Geneva Demonstration in support of COiE report. A friend of mine who went with me from France, a justice seeker, looked un happy. I asked him why? He told me that, pointing at a posters depicting Eritrean Mulsims who were arrested by PFDJ from Keren in the early 1990s(1991-1995) and nothing is known about them till today, why these people are only carrying posters that show Mulsims? I was shocked by his question. I tried to explain to him about the victims and why these victims need voices. 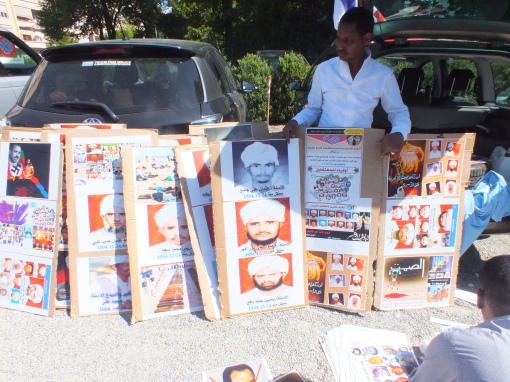 He tried to shift the subject. I insisted and told him that like G-15 and others prisoners in Era-Ero, these people are also victims. Every victim needs a voice and if anyone is lucky his voice will be raised. Otherwise, those voiceless people will be forgotten. He just tried to ignore our conversation.

Victims of PFDJ living in one of the most secretive prison centers, Era-ero

Another encounter I faced was in a discussion held between friends. A group of friends were pointing Elsa Chyrum for her biased approach. They were criticizing her for bringing Biteweded Abraha’s case to Geneva. Their allegation was that Elsa brought Biteweded because he is from her region, Seraye.

I was just shocked. I tried to explain why Biteweded’s case a special case and a strong reason to be brought at that particular moment to the UN office in Geneva. I tried to explain them the strong side of bringing Biteweded as a testimony of PFDJ crimes since 1991. No one was accepting my reasoning. What they tried instead was she could have selected another important figure which could be accepted by all. I insisted them to give me a special case. They brought a religious leader who is in prison since 2006.

I asked them if Elsa has never voiced for him. They couldn’t say anything. Finally they just tried to shift from the discussion.

Their reasoning was unconscious allegation of Elsa for her bias. What they didn’t understand was Elsa is an active human Rights defender for every Eritrean. Even some of these people who were accusing Elsa were beneficiaries of Elsa’s generiousity during their journey all along the Sahara, Libya and the sea. They just forgot what they got.

Since I started to write about some victimized Eritreans, I have seen counter reactions. For example, recently I wrote about four Eritrean women who became a victim of an Eritrean who claim himself to be a justice seeker named Aregai Hagos. When I wrote in defense of the four women I got three reactions from coming from different angles:

It is strange to see such normalization technique coming from people who claim to be fighting to end Eritrean grievances.

Another recent incidence is when I wrote about an Eritrean child who became a victim of PFDJ at the age of 15 and is kept in a secret prison for five years. Some even went further as if I am favouring her over the other victims of her ages.

Someone nicknamed ጽዮን (Zion) produced a picture like the one below:

He upload this picture to his facebook page with a description that reads: 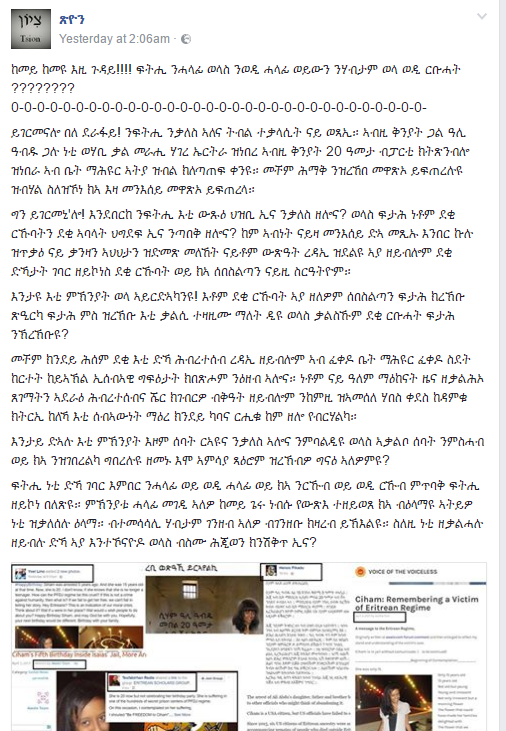 “Hello Justice seekers, dankera seekers and power seekers.
Many young people are under isayas dictatorship but they did not get their voice heard because they are not VIP. I understand that the opposition aka opposition to Eritreans is in fledgling mode.”

These kind of responses are so common these days. Whether we are doing it on purpose or not what we are doing is against what we advocate for. A single victim’s grievance is part and parcel of the whole grievances. In short, when we say Eritrean Grievances, it is the sum total of all grievances.

This simple concept is what it forced me to come with a mathematical equation that explains what an Eritrean GRIEVANCES  is meant.

And now we are saying why we talk about Ciham when there are many children are also victims.

2. First phase of the Equation

Every case presented above is a grievance by itself. Hence there is mathematics of addition. And the Equation will be:

TOTAL GRIEVANCES is then given by:

On the other hand, PFDJ junta and its supporters claim that all these grievances are false and non-existent. Their equation looks like this:

We will have this equation as per your and many alike minded peoples’ assertion, where the PFDJ junta is trying to equate it.

From the two equations, what we can learn is that PFDJ wants to neutralize people’s claim of grievances. And there are so many individuals who use the same tactic and try to normalize our suffering. I hope this equation will help justice seekers to identify which equation best suits them. Trying to cancel one grievance by another is simply illogical and anti-voice of the voiceless victims.

We need to choose between equation 1 and 2 and know who we are.

On this occasion, I would like to share with you an inspiration voice of Biteweded Abraha. He is an exceptional hero of all time who stood for the interest of the Eritrean people.