It is no doubt that Eqbal Ahmed was such a highly caliber scholar of modern politics. He moved from Pakistan to USA, fought in Algeria and thought in many universities and lectures throughout his academic career. He was a political visionary deeply rooted from historical and developmental perspective. But why PFDJ took him as a celebrate scholar in their political propaganda?

I remember his book titled, “Confronting Empire” written in 2000. That book was re-printed in PFDJ printing press and was distributed for free in every corner of the country. I read that book in 2008 and discussed with fellow colleagues. What I read and learned from that book was quite different from what we were supposed to understand. The objective was quite clear at that time. PFDJ was attacking US day and night, in all his propaganda spheres and for that, a tool was required and people need some proofs for accepting what it is said. From this point of view, college students were the primary target to have and debate about such books which speak about imperialism.

But, what is the message inside the book? Was it what the cover only tells? How deep was Iqbal Ahmed against injustice in his critical writings? Was he a consciousness opener, or a propagandist, just based on hate? These are my simple questions to explore Iqbal Ahmed after 6 years.

Iqbal was against injustice, exploitation, war, oppression and above all peace and prosperity. His critic to US was not for the sake of political consumption, it was a call to awareness to the world. But, PFDJ tried to exploit his book against USA propaganda, as imperialist. They did not understand what Iqbal was saying to them, they did not understand that they are worst than any on this earth oppressors and racists. I recommend them to re-read the whole entire content what message it has. Actually, now it is too late to do that. They are gone, GONE FOR EVER from the political life of Eritrea.

Here is a biography of Iqbal Ahmad written By Edward W Said on The Guardian, Friday 14 May 1999 (http://www.theguardian.com/news/1999/may/14/guardianobituaries1).

Eqbal Ahmad, perhaps the shrewdest and most original anti-imperialist analyst of Asia and Africa, has died, aged 66, in Islamabad following an operation for colon cancer. A man of enormous charisma and incorruptible ideals, he was a prodigious talker and lecturer.

He had an almost instinctive attraction to movements of the oppressed and the persecuted, whether in Europe, America, Bosnia, Chechnya, South Lebanon, Vietnam, Iraq or the Indian sub-continent. He had a formidable knowledge of history, always measuring the promise of religion and nationalism against their depredations and abuse as their proponents descended into fundamentalism, chauvinism and provincialism.

Ahmad was a fierce, often angry, combatant against what he perceived as human cruelty and perversity. During his last years, he dedicated himself – quixotically it would sometimes appear – to the creation of an alternative university in Pakistan, named Khalduniyah after the great Arab polymath and historian whose comprehensive view of the human adventure Ahmad sought to embody in a curriculum solidly based in the modern humanities, social and natural sciences.

Born in the Indian state of Bihar, he and his siblings left for Pakistan in 1948; before that, his father was murdered in bed over a land dispute, as the boy lay next to him, a traumatic event Eqbal would cite when he attacked material acquisitiveness.

In Lahore, he attended Foreman Christian College, became briefly an army officer, then went to the United States in the mid-1950s as a Rotary fellow in American history at Occidental College, California. He entered Princeton in 1958 with a double major in political science and Middle Eastern studies. He got his PhD in 1965 and, during his Princeton years, went to Algeria, joined the FLN, was arrested in France and established a cultural centre in Tunis.

During the 1960s, he taught at Cornell and Chicago, and was among the first fellows of the anti-war Washington Institute of Policy Studies (IPS). In 1969 he married Julie Diamond, a teacher and writer from New York, and between 1973 and 1975 he established and headed the IPS’s offshoot in Amsterdam, the Transnational Institute.

Ahmad was an early and prominent opponent of the Vietnam war, and in 1970 was tried with the Berrigan brothers on a trumped-up charge of conspiracy to kidnap Henry Kissinger – on which he and his alleged co-conspirators were acquitted. In addition to his outspoken support of unpopular causes (especially Palestinian rights), Ahmad’s uncompromising politics kept him an untenured professor at various universities until 1982, when Hampshire College, Massachusetts, made him a professor. He taught there until he became emeritus professor in 1998, dividing his time between New England and Pakistan.

During these years he travelled all over the world. Arabs, for example, learned more from him about the failures of Arab nationalism than from anyone else. In 1980, in Beirut, he was the first to predict the exact outlines of the 1982 Israeli invasion; in a memo to Yasir Arafat and Abu Jihad he also sadly forecast the quick defeat of PLO forces in South Lebanon. He was a relentless opponent of militarism, bureaucracy, ideological rigidity and what he called ‘the pathology of power’. He was consulted by journalists and international civil servants about abstruse currents in contemporary Afghanistan, Algeria, Iran, India, Pakistan, Angola, Cuba, Sri Lanka and he had an encyclopaedic knowledge of the US.

No one who saw him sitting bare-foot and cross-legged on a living-room floor, conversing genially until the early hours, with a glass in his hand, will ever forget the sight or the sound of his voice as he announced ‘four major points’ – but never got past two or three. He loved literature, especially poetry, and the sensitive and precise use of language, whether it was Urdu, English, French, Arabic or Farsi.

Immaculate in dress and expression, faultlessly kind, an unpretentious connoisseur of food and wine, he saw himself as a man of the 18th century, modern because of enlightenment and breadth of outlook, not because of technological or quasi-scientific ‘progress’. Somehow he managed to preserve his native Muslim tradition without succumbing either to the frozen exclusivism or to the jealousy that has often gone with it. Humanity and secularism had no finer champion. He is survived by Julie, and their daughter Dohra, a graduate student at Columbia.

Chomsky came in the attention of PFDJ political life as a libertarian socialist, Sometimes called social anarchism or left libertarianism is a group of that promote a non-hierarchical, non-bureaucratic society without private property in the means of production (http://en.wikipedia.org/wiki/Libertarian_socialism). This is a good propaganda tool for their one-man centered philosophy of dictatorship in putting all properties under their control. Similar to Eqbal Ahmad’s works, Chomsky’s specific works were of major source information in PFDJ propaganda. As Libertarian socialism is a perfect tool in removing capitalist system of economics, private freedom, waged labor, social gathering and by controlling means of production.

In addition, Chomsky is known for his anti-American hegemonial dream, which made him known to public during Vietnam war and his connection with many revolutionaries of 1960s and 70s. His inclination to arachist communism is also an advantage for the self claimed ideology of the PFDJ, the social justice. One thing that the Eritreans are not allowed to know about Chomsky is his work on science and technology. Just the ill-intentioned information that fullfills their mission was provided to their readers.

Here is a short biography of Noam Chomsky compiled from wikipedia.
(For more information read: http://en.wikipedia.org/wiki/Noam_Chomsky) 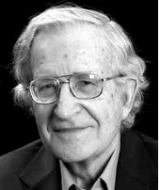 His full name, Avram Noam Chomsky was in born December 7, 1928 froma middle-class Ashkenazi family in US Philadelphia, is an American linguist, philosopher, cognitive scientist, logician, political commentator and activist. Sometimes described as the “father of modern linguistics”, Chomsky is also a major figure in analytic philosophy. He has spent most of his career at the Massachusetts Institute of Technology (MIT), where he is currently Professor of Emeritus, and has authored over 100 books. He has been described as a prominent cultural figure, and was voted the “world’s top public intellectual” in a 2005 poll.

Chomsky developed an early interest in anarchism from relatives in New York City. He later undertook studies in linguistics at the University of Pennsylvania, where he obtained his BA, MA, and PhD, while from 1951 to 1955 he was appointed to Harvard University’s Society of Fellows. In 1955 he began work at MIT, soon becoming a significant figure in the field of linguistics for his publications and lectures on the subject. He is credited as the creator or co-creator of the Chomsky hierarchy, the universal grammar theory, and the Chomsky-Schützenberger theorem. In 1967 he gained public attention for his vocal opposition to U.S. involvement in the Vietnam War, in part through his essay The Responsibility of Intellectuals, and came to be associated with the New Left while being arrested on multiple occasions for his anti-war activism. While expanding his work in linguistics over subsequent decades, he also developed the propaganda model of media criticism with Edward S.Herman. Following his retirement from active teaching, he has continued his vocal public activism, praising the Occupy movement for example.

Chomsky has been a highly influential academic figure throughout his career, and was cited within the field of Arts and Humanities more often than any other living scholar between 1980 and 1992. He was also the eighth most cited scholar overall within the Arts and Humanities Citation Index during the same period. His work has influenced fields such as artificial intelligence, cognitive science, computer science, logic, mathematics, music theory and analysis, political science, programming language theory and psychology. Chomsky continues to be well known as a political activist, and a leading critic of US foreign policy, state capitalism, and the mainstream news media. Ideologically, he aligns himself with anarcho-syndicalism and libertarian socialism.